Child abduction has impacted everyone from royalty to A-list movie stars and, shockingly, most likely someone you know. It is estimated that every year at least 500 children will be abducted from Australia, overseas. Many more will be abducted within our shores, making Australia one of the highest ranking parent-child abduction hotspots in the world.

The Child Snatchers takes an investigative look at some of Australia’s more notorious cases. Sally Faulkner, who along with a 60 Minutes television crew, found herself in a Beirut prison for trying to bring her children back to Australia; The four Vincenti sisters, brought to Australia and returned to Italy under traumatic circumstances; Dorothy Lee Barnett, wanted for abduction by the FBI for 20 years, finally found on the Sunshine Coast.

Each of these stories are deeply personal, highly complex and frighteningly true. Were they a desperate act of protection; or a despicable act of revenge?

The Child Snatchers explores the too-often bitter nature of separation and divorce, and our heavy reliance on the overburdened Australian Family Law system. It brings you the heartfelt, true accounts of left-behind parents and the children they longed for. Some are heartwarming, successful recoveries; others may never see their children again. All will leave you questioning everything you thought you knew. 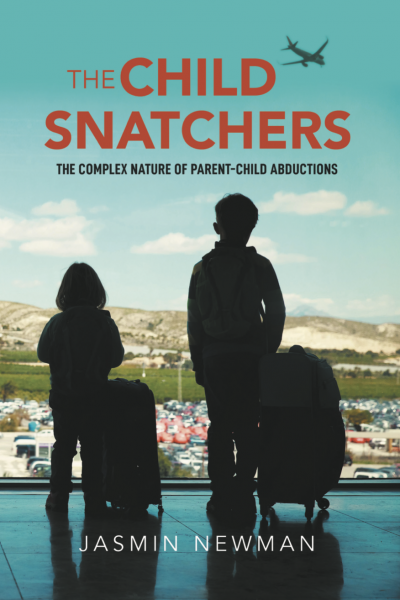 The Child Snatchers comprises of 14 stories of parent-child abduction. Some of these you will recognise. Sensational and dramatic, these families made headlines for all the wrong reasons. Others are lesser known, but equally deserving of recognition.

The purpose of writing The Child Snatchers was to investigate how these events occur, and detail the devastating impact on every day families.  The Child Snatchers also raises ethical questions on how we can prevent international and domestic abductions from occurring, and what we, society, can do to support our loved ones through a better, less adversarial decision making process after relationship breakdown.

When Sally Faulkner said good-bye to her children at Brisbane airport for a holiday in Lebanon, she never expected they would not be returning. Her captivating story to retrieve her children resulted in Sally, and the 60 Minutes television crew assisting her, facing twenty-one years in a Beirut prison. Also imprisoned was the recovery agent employed to protect them all. How did this abduction recovery go so wrong?

Under The Australian Sun

For two years the four Italian born Vincenti children lived in Australia. Along with their Australian mother, they were fleeing an allegedly violent father at home in Tuscany. After two-years on the run, they were ordered to return to live with their father in Italy in dramatic circumstances. Throughout their entire ordeal, these children were highly traumatised. What motivated the Australian court to make such a decision that was clearly against the children's wishes?

When Jodie Bilborough boarded a plane with her husband and their 4-year-old son Laith, they were headed for Amman, Jordan. Jodie's dream was to explore a new life in a country she loved and to support her husband returning to his career. Almost immediately she realised she'd made a grave mistake. Jodie and Laith were held captive. Under Sharia Law, she could not leave home without her husbands consent and she most certainly could not take Laith out of the country. What came next was a 6 year battle for reunification as Jodie faced the Sharia Court. What happens when diametrically opposed cultures collide after relationship breakdown?

When the Australian Federal Police were investigating the disappearance of multiple children and their mothers from separate families in Queensland, they discovered common themes leading them to believe these cases were connected. Creating a joint task force, 'Operation Noetic' was born. In October 2016 the AFP recovered the last of the missing children and arrested their mother. Soon after they arrested several individuals who police allege had formed a syndicate to abduct children and their mothers who disagreed with their family court outcomes. Who were the real abusers?

Wanted By The FBI

When the FBI began investigating the missing child known as Savanna, they had no inkling this would become the longest running parent-child abduction case in the history of America. On the run for almost 20 years, the mother changed their identities and moved across 3 continents. How did she do it? And what motivated her so strongly? And what happens now for the left-behind father who waited a lifetime to reunite with a daughter he never gave up on?